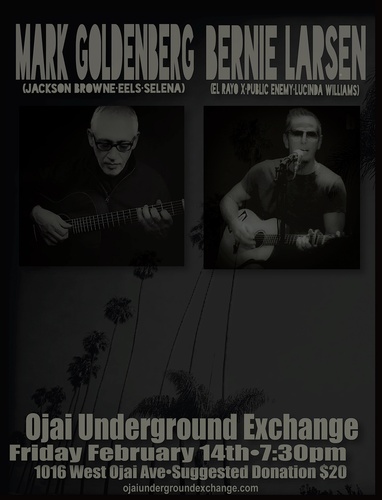 From 2012-2014 he toured with acclaimed pianist and actor Hugh Laurie. In 2016 he played with Spanish superstar Manolo Garcia. He is also a songwriter and producer, whose works have been recorded by Linda Rondstat, Chicago, Pointer Sisters, Natalie Imbruglia, Eels, Chris Botti, and Olivia Newton John, among others. During the 1980’s Mark released four albums of instrumental music in Japan. He released his first self titled CD of solo guitar music in 2004. In 2015 Mark and guitarist Eric Skye released a recording of duo music: “Artifact”. Mark, along with noted drummer Jay Bellerose and bassist Jennifer Condos released “trio” a collection of instrumental pieces.

Singer/songwriter/multi-instrumentalist and producer Bernie Larsen has lived a charmed musical life for many years. He has recorded, toured, and produced an elite handful of artists most of which are Grammy Award recipients including Melissa Etheridge, Jackson Browne, Rickie Lee Jones, Lucinda Williams, and Public Enemy. He also spent six years as an original member of David Lindley’s legendary band El Rayo-X.

He worked as producer and composer of music for films like "Friends With Money" starring Jennifer Anniston, and "Elsewhere" featuring Oscar nominated actress Anna Kendrick, and the soundtrack will be released this year through Immediate Music. He has put his stain on remixes and singles for artists like Low’s Alan Sparhawk and KCRW favorite West Indian Girl. His new solo record “Downward Dub", comprises of songs that range from dark wave to dub reggae to the track “Take Me In”, a minor key lilting reggae feel featuring the late, great Rock and Roll Hall Of Fame inductee Ian “Mac” McLagan on keyboards, and Lucinda Williams’ rhythm section.

Cry on Cue’s latest release, Love + Trust, is the result of a collaboration with renowned reggae producer Karl Pitterson, whose recording credits include such reggae greats as Bob Marley, Burning Spear, Peter Tosh, Bunny Wailer and Toots and the Maytals. The resulting record is one that Reggae Beat magazine called “…rock-solid reggae as crisp and bright as anything on the Harder They Come soundtrack… a Tour de Force.” A versatile player, Larsen is heard on guitar, bass, keyboards, and vocals; but, according to Vintage Guitar Magazine, his “strength is rhythm...the term ‘rock-steady’ could have been invented for him.” Dan Forte.