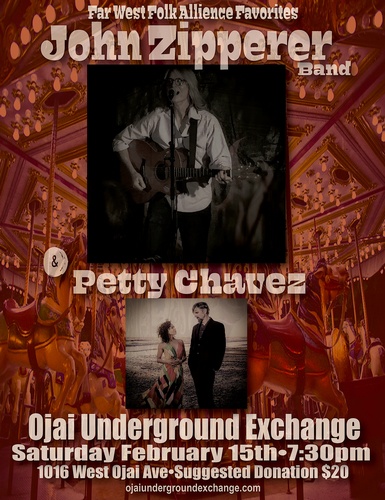 Event Description:
Join us Saturday, February 15th for John Zipperer & Petty Chavez! A former tv actor and stuntman, John Zipperer’s second chance came rolling down the highway of life, not on a carefully controlled movie or commercial set, but while changing a tire for a friend along the 285 freeway in Atlanta, GA. John was hit by a ten-wheel oil truck. After flying forty feet and landing in the hospital, John was told by the critical care doc, “You should be dead!” To John this seemed like a clear sign that life is, or could be, too short.

He packed everything he owned into his 1976 Camaro and headed out to Los Angeles to pursue a life in music. It was ZipTime! John’s clear voice, infectious melodies and heartfelt lyrics reach fans in places that they didn’t know existed. Soon everyone is singing along, swaying, chair dancing, head bobbing, and clapping. Fans remark over and over about the joy that is evident when John is on stage – joy in playing, joy for their audience, joy from the audience. John Zipperer delivers a unique and refreshing blend of rock, folk, country and blues.

PETTY CHAVEZ is an acoustic singer songwriter duo; a transatlantic folk-pop partnership that creates evocative, memorable and intimate music that enchants audiences in Southern California, their home, and beyond. Simon Petty, frontman of LA-based British band Minibar, and Celia Chavez, touring backup vocalist for Enrique Iglesias, showcase their smoky vocal harmony and haunting, articulate songwriting on Jodrell Bank and Our Apartment, the first two preview singles from their upcoming debut album, One Last Look At the Stars.

While Simon grew up in Great Britain, Celia is originally from Seattle. Although they come from different worlds, their passion for music, singing, writing and performing is remarkably similar. So many of the musicians who inspire them both are legends of a very influential era of music: The Beatles, Neil Young, Paul Simon, Joni Mitchell, Linda Ronstadt, Bob Dylan, Gram Parsons, Tom Petty, Prince and Stevie Wonder. Both were fortunate to have parents who supported their dreams and encouraged them to follow their musical hearts.
Date/Time Information:
Show begins at 7:30pm
Contact Information:
Send an Email
Fees/Admission:
$20 suggested donation at the door
Set a Reminder:
Business Directory Events Calendar Job Postings Contact Us Weather
Go mobile with MyChamberApp!