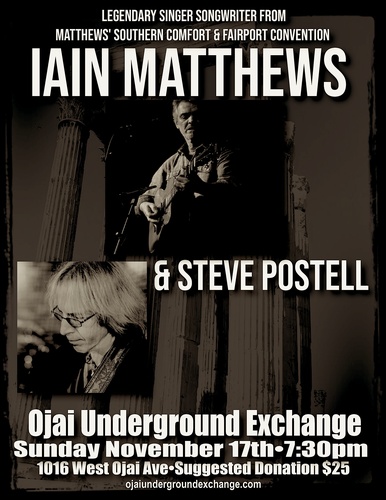 The pair, with more than 60 albums between them, have once more joined forces for a special West Coast concert tour. They are also currently writing songs for their first duo album.

This is a rare opportunity to be up close and personal with these multi-talented singer/songwriters and share their special music. Miss them at your peril.

Iain Matthews first gained attention as a founding member and vocalist for the innovative Fairport Convention. He moved on to create Matthews? Southern Comfort who had a No 1 hit in the UK with Joni Mitchell?s ?Woodstock?. Iain moved on during the 1970?s with another group, Plainsong. Between his own solo recording and various Plainsong line-ups Iain released ten albums to critical acclaim including another well known Top Ten US hit with the single ?Shake It?.

During the early 1980?s Matthews recorded a wonderful version of Peter Gabriel?s ?Mercy Street?, contributed to a Phil Ochs?s Tribute album and recorded plus toured with Nanci Griffith.

In 2000 Matthews settled in the Netherlands and found a busy, happy life in Europe. More collaborative recordings were issued including a Tribute album to Sandy Denny. However, Matthews feels he has finally found an almost perfect musical sweet spot, playing solo.

Trained at The Mannes College Of Music in New York City, Steve Postell has had a successful, prolific career which spans his days playing with Pure Prairie League, performing on Broadway in shows such as ?Evita? and ?The Man Of LaMancha,? co-writing the score for the off-Broadway rock musical "Fallen Angel", touring with Lea Salonga as her musical director, and fronting the popular New York City bands, ?Chain o' Fools? and ?Little Blue?. Steve has written scores for film and television, and produced Lawrence Kasdan?s "Jumpin' At The Boneyard". Steve wrote and produced many jingles & has performed live on numerous TV shows.

Steve was the project coordinator for the Shout Factory release of the 20th anniversary edition of the Jennifer Warnes/Leonard Cohen project "Famous Blue Raincoat", and has toured and recorded with Jennifer as her guitarist and musical director. He is also working on a documentary featuring the debut of a new orchestral piece by Ravi Shankar.

Steve recently won a ?HOLLYWOOD MUSIC IN MEDIA AWARD? for best song in the Americana/Roots category for his song ?3:45 Coming Through?, and had a song featured in the Ricky Gervais film ?The Invention Of Lying?. He also recently composed the music for a classical ballet choreographed by Zippora Karz.