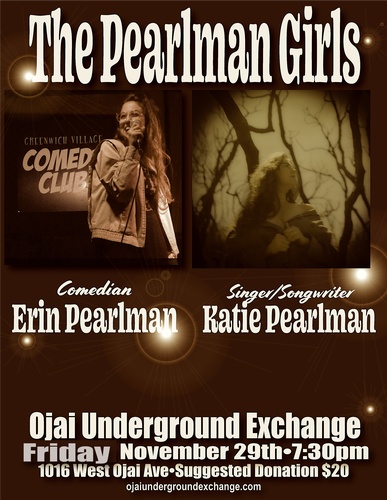 Event Description:
Join us for an entertaining evening of comedy and song Friday, November 29th with The Pearlman Girls! We open with the adorable New York based photographer/comedian Erin Pearlman. She strives to encapsulate the human condition in its most raw, distilled form - emphasizing playfulness, joy and a bit of raunchy spice. Erin’s work in both mediums highlight the daily rituals informing the way we interact with the world in an effort to depict what’s honest and true. Her sister Katie Pearlman is an incredibly talented singer songwriter signed to Warner/Chappell. She has written songs for artists such as Kelly Clarkson, Adam Lambert, Gryffin, and Grace Potter. Grace Potter recently performed her single Back to Me on NBC. Kelly Clarkson’s album was nominated for a Grammy for best Pop vocal performance. Katie toured with Gryffin performing The Palladium, Outside Lands, the Wiltern and Terminal 5. Her own voice is stirring; and her songs are rich, riveting and soulful. She is currently working on a solo debut record and plans to be releasing songs in 2020. She enjoys coming to Ojai to stay with her family and write and work in solitude, and feels it has been a huge gift for her craft. The show begins at 7:30pm, and there is a $20 suggested donation at the door.
Date/Time Information:
The show begins at 7:30pm
Contact Information:
Send an Email
Fees/Admission:
$20 suggested donation at the door
Set a Reminder:
Business Directory Events Calendar Job Postings Contact Us Weather
Go mobile with MyChamberApp!