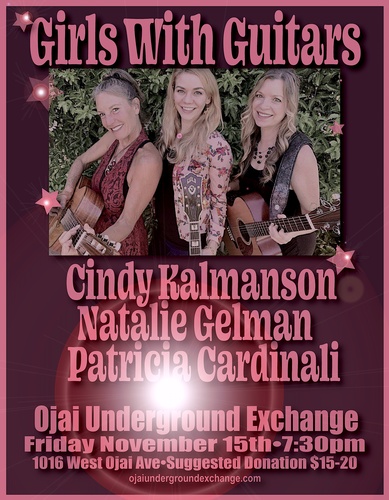 Join us for an evening of acoustic music Friday, November 15th with Cindy Kalmenson, Patricia Cardinali and Natalie Gelman! Cindy continues to travel as a solo artist as well as playing festivals, listening rooms and house concerts around the West. She is a very spontaneous, engaging and soulful performer who feels very much at home on stage. Cindy was named the winner of West Coast’s songwriting associations contest for best song of 2010. She has been compared to Sheryl Crow, Kathleen Edwards, and Lucinda Williams.

Cindy was the founder and host of a very successful show that began in 1996 called Girls With Guitars showcasing some of the finest singer songwriters in Nashville. Many of the girls have gone on to major label contracts and publishing deals: Lisa Carver, Nicole Witt, Mary Gauthier, Mindy Smith.

Patricia Cardinali is a singer/songwriter/musician who is well known for her original solo work as well as playing with Jimmy Calire, Patti Cakes and the Baker's Men, The Ojai Mardi Gras Band, and is also the music director for the Center for Spiritual Living and Meadows Montessori.

Raised in the old West Village, NYC stomping ground of songwriting greats, Natalie Gelman grew up amidst artists and true bohemians. She borrowed a friends guitar at 16 and started writing songs on it immediately and began busking on subway platforms soon afterwards when she grew tired of pretending to be 21 to play clubs in the city.

Often compared to Sheryl Crow, Jewel and Joni Mitchell, Natalie’s music is contemporary and timeless. She writes honest, heartfelt songs - responding to current affairs and revealing parts of her inner self with the world. “Not too much about her, but somehow about me & everyone in the audience as well.”