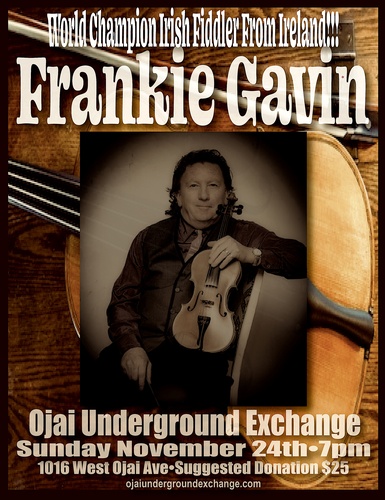 Event Description:
Join us Sunday, November 24th for a special Sunday show with Frankie Gavin! Frankie Gavin is one, if not the best, of Ireland's premier traditional players.
In a nutshell, Frankie has been playing since the age of four, when he was handed a whistle , and has since performed for four American Presidents (among others) beginning at the age of six; won All-Ireland titles on flute and fiddle at age 17; is a founding member of legendary Irish traditional band De Danann and New De Danann; performs and records with other luminaries in the Irish trad music scene and more, such as Yehudi Menuhin, James Galway, Elvis Costello, Stephane Grappelli, and the Rolling Stones. He was in the 2010 Guinness Book of World Records as the world's fastest fiddler; was made the Irish Ambassador to Italy in 2013; won Gradam Ceoil's prestigious 2018 Musician of the Year award; AND played for the Pope in Dublin, along with Andrea Bocelli and others. And as if that were not enough, De Danann were also on an official Irish stamp! The Sunday Times's Fintan Vallely says of Frankie's playing:
"Innovation may be the buzz-word in Traditional music, but Frankie Gavin’s digressions are not in the common areas of tempo and superficial style-impressions. His contemporary borrowings of art deco and music-hall Irishness are re-jigged in original avenues of exploration ..."
"Frankie Gavin is one of the geniuses of Irish music, recognized as one of the world fiddle/ violin masters and compared to artists of the caliber of Grappelli in jazz and Menuhin in the classical world ...Ita Kelly, Tara music
Frankie Gavin was born in 1956 in Corrandulla, County Galway, from a musical family; his parents and siblings being players of the fiddle and accordion. As a child he played the tin whistle from the age of four and, later, the flute. He received some formal training in music, but his musical ability on the fiddle is mainly self-taught. When 17 years old, he gained first place in both the All Ireland Under-18 Fiddle and Flute competitions. His contemporary borrowings of art deco and music-hall Irishness are re-jigged in original avenues of exploration. His dexterous treatment of troublesome tunes might get even the Pope out on the floor, his orchestration could break hearts.
He is generally regarded as the finest traditional Irish fiddle player of his generation.  A superbly uncompromising player, Frankie makes refreshment of the old by picking out and polishing every detail and setting it off in a steady, listenable pace. Gavin edgy and brilliant on both fiddle and flute, with always the most meticulous attention given to tone and variation. Live, his tune sets are perfectionism that drive and are driven by an audience spontaneity that spurs Gavin to push fiddle from shriek to rasping bass.
Date/Time Information:
7:00pm
Fees/Admission:
$25 suggested donation at the door
Set a Reminder:
Business Directory Events Calendar Job Postings Contact Us Weather
Go mobile with MyChamberApp!